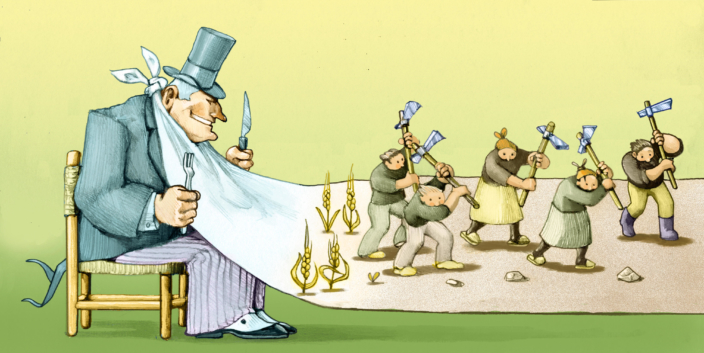 Even if Donald Trump loses the election, the conditions that made his authoritarian regime possible won’t disappear with him. If we are to heal our country and ensure against a repeat of the past four years, we need to boldly and aggressively scale our solutions to the size of the problem. And when it comes to our crisis of rising income inequality, the problem is huge.

How big is it? A staggering $50 trillion. As David Rolf and I wrote last week in TIME, that is how much the upward redistribution of income has cost American workers over the past several decades.

This is not some back-of-the-napkin approximation. According to a groundbreaking new working paper by Carter C. Price and Kathryn Edwards of the RAND Corporation, from 1947 through 1974, real incomes grew at close to the rate of per capita economic growth across all income levels. That means that for three decades, those at the bottom and middle of the distribution saw their incomes grow at about the same rate as those at the top. Had these more equitable income distributions merely held steady, the aggregate annual income of Americans earning below the 90th percentile would have been $2.5 trillion higher in the year 2018 alone. That is an amount equal to nearly 12 percent of GDP—enough to more than double median income, and enough to pay every single working American in the bottom nine deciles an additional $1,144 a month. Every worker. Every month. Every. Single. Year.

As the RAND report demonstrates, a rising tide most definitely did not lift all boats. It didn’t even lift most of them, as nearly all of the benefits of growth these past 45 years were captured by those in the top 1 percent.

At every income level below the 90th percentile, wage earners are now being paid a fraction of what they would have earned had inequality held constant. On average, extreme inequality is costing the median income full-time worker between $42,000 and $52,000 a year. Half of all full-time workers (those at or below the median income of $50,000 a year) now earn about half what they would have had incomes across the distribution continued to keep pace with economic growth; those without a college degree have actually seen their real incomes decline. And that’s per worker, not per household. Below the 50th percentile, households comprised of a married couple with two full-time workers now earn little more than what a single-earner household would have earned had inequality held constant. It’s easy to understand why so many voters are so angry: two-income families are now working twice the hours their parents did to maintain a shrinking share of the pie, while struggling to pay housing, health care, education, childcare, and transportation costs that have grown at two to three times the rate of inflation.

There are some who blame the current plight of working Americans on structural changes in the underlying economy—on automation, and especially on globalization. According to this popular narrative, the lower wages of the past 45 years were the unfortunate but necessary price of keeping American businesses competitive in an increasingly cutthroat global market. But in fact, the $50 trillion transfer of wealth the RAND report documents, has occurred entirely within the American economy, not between it and its trading partners. No, this upward redistribution of income, wealth, and power wasn’t inevitable; it was a choice—a direct result of the trickle-down policies we chose to implement after 1975.

We chose to cut taxes on billionaires and to deregulate the financial industry. We chose to allow CEOs to manipulate share prices through stock buybacks, and to lavishly reward themselves with the proceeds. We chose to permit giant corporations, through mergers and acquisitions, to accumulate the vast monopoly power necessary to dictate both prices charged and wages paid. We chose to erode the minimum wage and the overtime threshold and the bargaining power of labor. For four decades, we chose to elect political leaders from both parties who put the material interests of the rich and powerful above those of the American people.

By putting a $50 trillion price tag on the consequences, the RAND report gives us permission not just to make different choices, but to make historically bold choices—choices that scale to the enormous size of the problem. The central goal of our nation’s economic policy must be the doubling of median income. Anything less would leave our nation vulnerable to renewed authoritarian attack. President Trump could not bring himself to buttress his white nationalist agenda with a genuine appeal to egalitarian economics—but the next would-be dictator might. We must not, through inaction, give an authoritarian demagogue that chance.

Welcome to the Winning Middle-Out Era