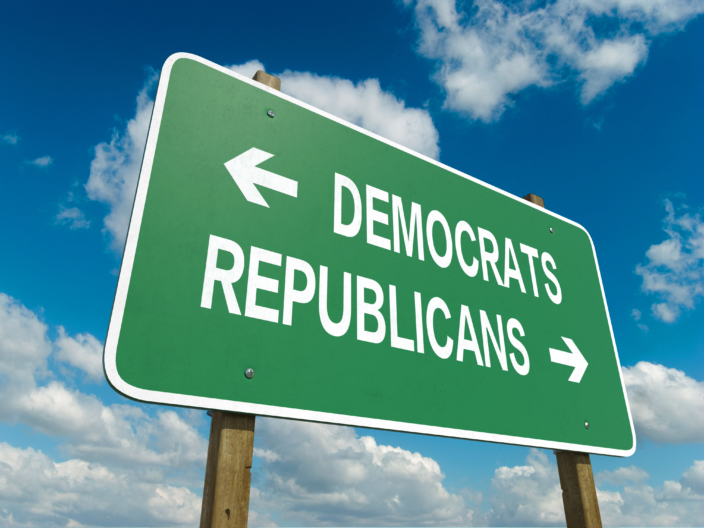 It is hard not to be depressed watching our political system at work. Red and blue Americans are not only moving further apart on social, cultural, and economic priorities, but have even convinced themselves that the other side is dangerous. A UVA Center for Politics and Project Home Fire survey taken over the summer found that 80 percent of Joe Biden voters and 84 percent of Donald Trump voters agreed with the statement that elected officials from the opposite party represent a “clear and present danger to American democracy,” while three-quarters of both Trump and Biden voters think that supporters of the opposite party represent a “clear and present danger to the American way of life.”[i] This polarization did not happen overnight. We have been watching our division grow deeper and wider over the last 25 years.

There are a number of theories for how we got to this point. Technology is often picked as the biggest culprit. The rise of the Internet happened to correspond with a decline in split-ticket voting. From 1956 to 1996, the average number of split-ticket districts (districts that voted for the President of one party and a member of Congress of the other) ranged between 109 to 192.[ii] But, as we moved into the twenty-first century, those split-ticket districts declined. By 2012, there were just 26 split-ticket districts. After the 2020 election, there were just 16. Not only does this mean that few members of Congress represent areas of the country where their party is not dominant, but it also means that the members of each caucus in Congress have become more ideologically and culturally homogenous.

It also happens to be true that, for the last 20 years, Americans have been getting more and more of their news and information from the Internet and social media. Algorithms and business models that prioritize clicks over context have helped to cocoon many Americans in their own cultural and political bubbles. As such, politics has become more nationalized. Candidates are now defined more by the color of the jersey (Republican red or Democratic blue) than by their individual ideologies and policy positions.

This nationalization of our politics has impacted the Senate as well. In 2016, every one of the 24 Senate races went the same way as the presidential results in that state. No Republican won in a state that Hillary Clinton carried. No Democrat won in a state that Trump carried. In 2020, just one Senate race—Maine—bucked the presidential result. As such, there are fewer split delegations today (a state that sends a Democrat and a Republican to Washington) than since the direct election of senators began in 1914.[iii]

This geographic polarization, however, also reveals a deepening economic divide. As a recent Brookings Institution study put it: “[T]he Democratic Party is now anchored in the nation’s booming, but highly unequal, metro areas, while the GOP relies on aging and economically stagnant manufacturing-reliant rural and exurban communities.”[iv]

Today, Democratic-held congressional districts and counties are responsible for most of the economic growth in the country. In 2020, Donald Trump won 2,564 counties to Biden’s 520. But those 2,564—most smaller and rural counties—produced just 29 percent of the nation’s GDP. Meanwhile, those 520 counties, including those like Maricopa (Phoenix), Harris (Houston), and Los Angeles, produced 71 percent of economic growth.

Back in 2008, the Brookings Institution reports, the average median household income was equal between Democratic-held congressional districts and Republican-held ones.[v] But, over the last ten years, as Democrats have picked up formerly GOP-held suburban areas and Republicans have dominated in once safely Democratic blue-collar bastions in places like Ohio and Pennsylvania, the median income for Democratic-held congressional districts has grown nearly 17 percent while falling 3 percent in Republican ones.[vi]

Ultimately,write Brookings’s Mark Muro and Jacob Whiton, “the nation seems destined to struggle with extreme economic, territorial, and political divides in which the two parties talk almost entirely past each other on the most important economic and social issues, like innovation, immigration, and education because they represent starkly separate and diverging worlds.[vii] Not only do the two parties adhere to very different views, but they inhabit increasingly different economies and environments.”

In other words, our political disunity is not driven by a lack of compromise on common problems, but by the fact that we do not agree on a common set of problems. For the last 20 years, the Pew Research survey has been asking voters to rank their top priorities for Congress and the President to tackle.[viii] Back in 1999, four of the top five issues for Republicans were also listed among the top five issues for Democrats. By 2009, just three issues ranked as priorities for both Democrats and Republicans. By 2019, not one of the five issues listed by Republicans as a top issue (Terrorism, Economy, Social Security, Immigration, and Military) overlapped with the top five priorities of Democrats (Health Care, Education, Environment, Medicare, and the Poor & Needy).

We have not just lost faith in one another; we have also been losing faith in most of the institutions that have served as the foundation of our society, like organized religion, public schools, and government.

But instead of thinking of this crumbling of traditional institutions as proof of a coming apocalypse, it may also be the tipping point toward the creation of a new, twenty-first century institutional model; in other words, not just the end of one era but the beginning of another.

“When institutions fail, alternatives will always rise to take their place,” writes Rachel Botsman, a lecturer at Oxford University’s Saïd School of Business in her book Who Can You Trust: How Technology Brought Us Together and Why It Might Drive Us Apart.[ix] Botsman argues that “we are at the start of the third biggest trust revolution in the history of humankind,” one that moves from institutional trust to what she calls “distributed” trust. “Trust that used to flow upwards,” writes Botsman, “to referees and regulators, to authorities and experts, to watchdogs and gatekeepers is now flowing horizontally, in some instances to our fellow human beings and in other cases to programs and bots.” As we have lost faith in institutions like banks, big business, and the media, we have placed trust in things that at one point would have seemed outrageously dangerous. We are willing to get into a stranger’s car (Uber), stay in a stranger’s home (Airbnb), and purchase “currency” that exists only in the theoretical (Bitcoin). We share our opinions, bank accounts, and health records with one another via the Internet, often without thinking twice about how remarkable (and remarkably dangerous) this would have felt just a couple of decades prior.

It is easy to look at our ongoing political polarization and conclude that things will end only in violence or societal collapse. Yet, at the same time, we live in one of the most dynamic and adaptable societies in human history. Moreover, we are terrible at predicting the future, especially as technological developments outpace most of our imaginations. This is not whistling past the graveyard. I get that we have real and serious challenges ahead of us. But I also know that there are unseen currents all around us that are already making many of our assumptions moot. That is not to say we do not try to fix what is broken. Or that we assume this new era of trust will not have its own dark side. But we also need to have the humility to appreciate that there are no simple or obvious solutions.

When one party gets into power, it focuses on the top priorities of their voters. That often animates and angers voters from the other party, who see their own priorities being ignored. At the same time, independent voters punish any party in power they feel has over-reached. In fact, in every midterm election since 2006, independent voters have voted against the party in power by double-digits. In every one of those elections, control of the House, the Senate, or both, changed hands.

In other words, the more that blue and red America pull away from each other, the more critical the role of independent or less partisan identified voters is. They cannot stop our polarization, but they have prevented either party from instilling long-standing, one-party rule that focuses only on the issues and concerns of that party’s base voters.

[ix]Rachel Botsman, Who Can You Trust: How Technology Brought Us Together and Why It Might Drive Us Apart.(New York, NY: Public Affairs, 2018).

Amy Walter is Publisher and Editor-in-Chief of the Cook Political Report with Amy Walter. A contributor to the PBS NewsHour, she provides weekly political analysis for the popular “Politics Monday" segment and is a featured contributor for their Election and Convention special coverage events. She is also a regular Sunday panelist on NBC’s Meet the Press and CNN’s Inside Politics and appears frequently on Special Report with Bret Baier on Fox News Channel. From 2017 until early 2021, she was the host of the weekly nationally syndicated program : “Politics with Amy Walter" on “The Takeaway from WNYC and PRX." She’s also the former political director of ABC News.