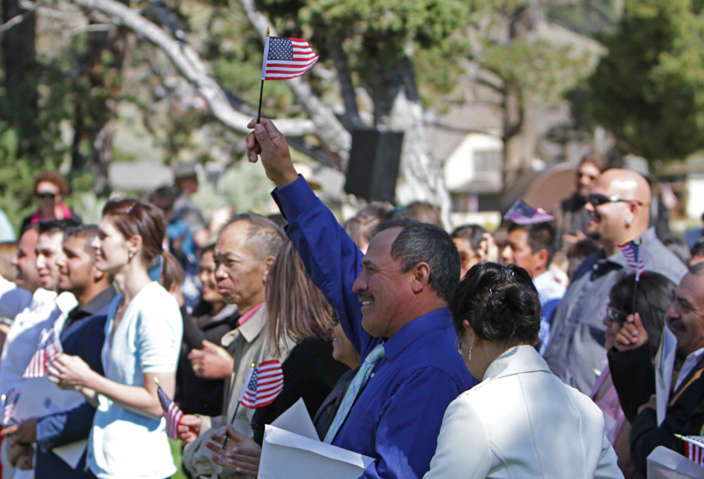 In his final words to the nation, Congressman John Lewis, one of the great champions of American democracy, said: “Democracy is not a state. It is an act, and each generation must do its part…” In other words, our government’s ability to function depends on each of us to vote, participate, hold elected officials accountable, and make “good trouble.” To Lewis, protest was one of the highest forms of patriotism. He understood better than most that democracy is always in need of defending and perfecting. That’s why this special issue of Democracy is so important. Not only is it one of the most comprehensive catalogues of Donald Trump’s assault on democracy to date—it’s a collection of smart, substantive, and timely reflections on what we, as citizens, can do to defend and protect the world’s oldest democracy.

The through-line of American history has always been the struggle to define “we the people” and achieve a more perfect union. Today, in many ways, we’re freer than we’ve ever been—especially women, people of color, LGBTQ people, and so many others excluded from the Framers’ vision for our country. At the same time, we’re in as grave danger as any of us can remember. Over the last four years, we have witnessed a concerted attack on many of the things that define American democracy: free expression, free assembly, and a free press; the rule of law and an independent judiciary; vibrant civil society and transparent, responsive institutions that are accountable to citizens and protect their rights equally. Now, the President of the United States is exploiting a deadly pandemic to ratchet up his assault on democracy, sow chaos, and delegitimize the upcoming election. While we all wish the President and First Lady a full recovery from COVID, we also hope that this experience helps change the Administration’s approach to protecting lives from the virus. In the past, presidents have at least paid lip service to democratic ideals and norms. With this Administration, that’s no longer the case; they’re chipping away at those norms and ideals, and they’re doing it out in the open.

In his book, On Tyranny: Twenty Lessons from the Twentieth Century, historian Timothy Snyder wrote: “Americans are no wiser than the Europeans who saw democracy yield to fascism, Nazism, and communism. Our one advantage is that we might learn from their experience.” The essays in this collection project a stark picture of what four more years of a Trump presidency would mean: an uncontrolled pandemic that claims more lives and livelihoods, scientists and doctors silenced while conspiracy theorists are given powerful platforms, and continued attacks on civil rights. And, of course, the impacts would not be limited to our shores: If America continues to retreat from our leadership and values on a global scale, the consequences will be devastating. Already, we’ve watched the Trump Administration retreat from diplomacy and shrug their shoulders at human rights abuses, from the poisoning of Aleksei Nalvany to the murder of Jamal Khashoggi to the violent persecution of minority groups, including the Rohingya in Myanmar and the Uighur in China. Donald Trump’s reelection would be a blow for democracy around the world, in a moment already shadowed by a rising tide of authoritarianism.

All of this is bigger than one man, or one election. Even if Joe Biden and Kamala Harris prevail in the election, we’ll still have a lot to contend with: a divided country, a skewed Electoral College and Senate, a Supreme Court and federal bench stacked with right-wing ideologues, the hollowing out of local journalism, the corrosive effects of social media echo chambers, and the ever-accelerating spread of disinformation and conspiracy theories, often propagated by foreign adversaries. In order to make progress under any President, on any issue we care about, we need to repair and revitalize our democratic norms and institutions. And we need reforms to make democracy work for everyone and deliver real results that improve lives.

Democracy is not something we can take for granted. In 1995, one out of every 16 Americans was open to the idea of military rule in our country; by 2014, it was one in six. In 2011, almost half said they thought a political system with a strong leader who would not have to bother with Congress or elections was a good or very good idea. According to research by Harvard’s Yascha Mounk, over two-thirds of older Americans believe it is extremely important to live in a democracy; among millennials, it’s less than one-third. “The sinking attachment to democracy,” he writes, “is also making Americans more open to authoritarian alternatives.” (And that was before Donald Trump!) Those of us who are defenders of democracy can’t let ourselves be pigeonholed as defenders of a discredited status quo. Instead, we have to offer a compelling future—particularly for young people who make up the most diverse generation in U.S. history, people struggling to find their footing in yet another financial crisis, peaceful protesters demanding the end of systemic racism, small business owners struggling to rebuild, and others whose lives have been forever changed by the pandemic. There’s a lot we can and must do, starting with bold, creative policy proposals to tackle economic, health, and racial inequality; promote broad-based economic growth, justice, and opportunity; and make our government ethical, transparent, and responsive.

Despite everything we’ve witnessed over the last four years, I am still hopeful about the future of democracy in America. When the French writer Alexis de Tocqueville visited our country 200 years ago, he marveled at what he called our “habits of the heart”—the everyday values and acts that set us apart from the rest of the world. He found a nation of people who belonged to clubs and congregations, civic organizations and political parties, groups that brought Americans together and invested even the most rugged individualists in the welfare of their communities. Those habits of the heart he described have never been more visible than they are now. In the midst of a pandemic, we’ve seen neighbors checking in on neighbors, teachers finding creative ways to keep their students safe, and communities celebrating frontline workers. We’ve seen peaceful protests for racial justice, with volunteers in the crowd sharing masks, hand sanitizer, and bottled water. We’ve seen once again that yes, it takes a village.

Even beyond our current moment, over the last four years, we’ve seen a tidal wave of mass mobilization, from increasing voter turnout in the midterm elections, to citizens showing up in droves at city council meetings, to efforts to register voters and make sure everyone has the information they need to cast their ballot in this chaotic time, to people running for office in jaw-dropping numbers. As my dear friend Madeleine Albright—who knows of what she speaks when it comes to the dangers of fascism—has said, “This generosity of spirit—this caring about others and about the proposition that we are all created equal—is the single most effective antidote to the self-centered moral numbness that allows fascism to thrive.” When it comes to supporting and building a multicultural, pluralistic democracy that is accountable to its citizens, Americans are showing the leadership the Trump Administration lacks.

Democracy may be fragile, but the American people are resilient. And there is no myth more dangerous than the idea that it is too late to prevent our country from sliding into authoritarianism. Yes, we have work to do heading into November, but we can’t stop there. Regardless of the outcome, we must redouble our efforts to demand action from our government and keep citizens engaged—including by restoring civics education in our schools and holding social media platforms and their algorithms accountable—and to ensure that the passion of this moment translates into real, longterm change. After all, democracy is an act—one that doesn’t end on Election Day.

Hillary Rodham Clinton is a former U.S. senator and secretary of state and the first woman to win a major party’s nomination for President of the United States. She is the author of What Happened.